A meditation on island nature and the nature of islands

“Be not afeard; the isle is full of noises,

Sounds, and sweet airs, that give delight and hurt not.

Sometimes a thousand twangling instruments
Will hum about mine ears; and sometime voices,
That, if I then had waked after long sleep,
Will make me sleep again: and then, in dreaming,
The clouds methought would open, and show riches
Ready to drop upon me; that, when I waked,
I cried to dream again.”
― William Shakespeare, The Tempest

The complete project is nineteen videos, to be screened together or singly on digital flat screens with or without headphones.

The running time is just over two and a half hours.

In my many travels I have visited many islands and places with islands around them.  Among them Fiji, Tahiti, Hawaii, New Zealand, Singapore, Northern Borneo, Hong Kong, Japan, Thailand and Malaysia.

My fascination with islands originates from a variety of influences in my youth; amongst them was having to read William Shakespeare’s play The Tempest (quoted above)and The Kon Tiki Expedition by Thor Heyerdahl for my final English Literature examination at school.

“To have grown up dreaming of oceanic horizons inevitably dates me. To have narrowly inherited (even if by a few years) the culture of an island people, a nation of seafarers with a vast overseas empire, is an ironic mischance.” (James Hamilton Patterson–The Separate World Of Seaports.)

Various historical, musical, imaginary and mythical Borgesian like threads, coincidences and concerns join my videos together. Hauntology, disappearance, re-appearance; the permanence of  impermanence and the constant presence of the past as shared histories of colonisation or occupation.

The Ferryman, without whom you cannot reach most islands, is recurring theme. The ferryman has mythical meaning in many cultures connected with death and magical thinking.

Some of the videos share the same soundtrack and some soundtracks are from a completely different island than the one you are watching.

There are references, direct and indirect, to other film and video makers, storytellers and myth makers.

There is a concern with nature and ecology.

The fact of walking, the psychogeographic drift, the derive, in these islands and listening as a mode of meditation, often in places said to be held sacred to the local population, was the point of departure; to seek out ‘Listening Spots’ and to map them and guide people to them as being places where one could perhaps experience something, possibly quite ordinary, but, at the same time perhaps deep, quite extraordinary and spiritual.

Magical Thinking, Spirit Songs and Walking On Leaves On Islands.

“Magical thinking is the attributing of causal relationships between actions and events where scientific consensus says that there are none. In religion, folk religion and superstition the correlation posited is often between religious ritual, prayer, sacrifice, or the observance of a taboo, and an expected benefit or recompense. (Wikipedia)

Magical thinking  looks for meaningful relationships of  coincidences between acts and events.

‘Spirit Songs’, in the context of this work, signifies ‘field recordings’ or recordings of the ambient sound of the various locations visited. The title I chose,’Spirit Songs’, is influenced by Marina Rosenfeld’s book Healing Sounds From The Malaysian Rainforest (a study of Temiar Music and Medicine); The Land Of Remorse (A Study Of Southern Italian Tarantism) by Ernesto De Martino and Sound and Sentiment (Birds,Weeping,Poetics,and Song In Kaluli Expression) by Steven Feld.

The Kaluli people of Papua New Guinea believe that when we die we become birds.

‘Walking On Leaves’ comes from an expression used by the Free West Papua Independence Movement who claim their leader, Goliat Tabuni, can ‘walk on the leaves of trees’ – in other words magically appear in places at a great distance from one another in a very short time.

Pulau Ubin, – an island situated between Singapore and Malaysia is a part of Singapore which is a mixed culture of Malay, Chinese, Indian and European all of whom share cultural, spiritual and religious connections, via Taoism, Confucianism, Islam, Hinduism and Christianity. Modern Singapore was founded in 1819 by Sir Stanford Raffles as a trading post of the East India Company. The British obtained sovereignty over the island in 1824, and Singapore became one of the British colonies in 1826. It was occupied by the Japanese during World War 2. It declared independence in 1963 and united with other former British territories to form Malaysia, from which it departed two years later. I was on Pulau Ubin as artist in residence for The Artists Village group in 2013

Lamma island is a part of Hong Kong and is the third largest island of Hong Kong. Hong Kong became a colony of the British Empire after the First Opium War (1839-42). Originally confined to Hong Kong Island, the colony’s boundaries were extended in stages to the Kowloon Peninsula and the New Territories by 1898. It was occupied by Japan during the Pacific War, after which the British resumed control until 1997, when China regained sovereignty. The indigenous people are Taoist, Confucian and Animist. I was there as artist in residence in 2013 for the Soundpocket organisation.

Syros is situated in the Greek Cyclades islands, It appears in ancient times to have been inhabited by the Phoenicians. In the Odyssey, Syros was the country of the swineherd Eumaeus . The island was also the home of Pherecydes the philosopher, teacher of Pythagoras. It is a Catholic and Greek Orthodox Christian culture and a history which includes the Ottomans.  They did not take part in the Greek revolution of 1821 and as a result, Syros became a secure shelter during the Revolution, attracting many Greek refugees from Asia Minor, Chios, Spetses, Psara, Aivali, Smyrna, Kydonia, Kassos and other places. In the 19th century the port of Ermoupoli was the most important port in the Greek islands. During the second World War Syros was occupied by both the Italians and the Germans. I was ‘invited artist’ at Syros Sound Meetings workshop in 2013.

Bangkok is not an island but along the Chao Phraya river, which runs through its centre, there are nearly 40 floating metal river taxi boat stations. Each one an ‘island’.  This was the first film in my ‘Island’ project. Originally filmed on super eight film and then screened onto a piece of A4 paper and re-filmed using a 40 euro 2.5 pixel video camera and ‘worked on’ in iMovie after. The soundtrack was recorded on mini disc and is one of several recordings of the ‘voice’ of  the platforms. Each platform is able to rise and fall with the changing depth of water in the river by means of nylon rollers and pylons securing it to the river bed. As the platform moves it produces a sound – its ‘voice’ – each one unique.

More on the Chao Phraya River Bangkok project is here – 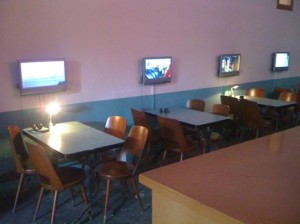 View of my installation at Son De Plateaux – 8 @ GRIM Marseille 2014 on four screens.