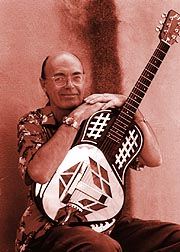 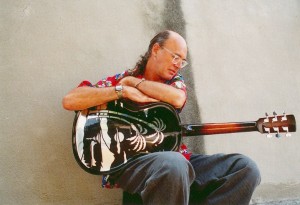 I have been more than lucky with guitars in my life and never more so than when Alan Timmins gave me the guitar in the pictures above. It is one of his F1 Resophonic Tri-Cones.
Unfortunately our friend Alan Timmins died after a long illness, on 3rd July 2008. He was 61 years old.
I own an original 1930’s metal bodied National Tri-Cone guitar and Alan, along with the National Reso-Phonic Guitar company in the US, was one of the first people to build a National style guitar after the original National company closed in the 1940s. Another mutual friend Mark Makin helped & advised, Alan to build the body & coverplate of a brass-bodied round-neck Tricone, by hand. As far as we know, this was the first time anyone had built one since National stopped production. Mark Makin  owns Alan’s first Tri-cone. Alan also helped Don Young at the newly formed National Reso-Phonic Guitars by providing him with 20 T-bridge parts for their first run of  new Tri-cones.
Being connected to the world of formula one racing cars, Alan started building guitars out of carbon fibre. They were called ‘F1’ guitars and for the next couple of years Alan built Tri-cones, single cones, mandolins & ukuleles.
Mark Makin has a mandolin and the original brass-bodied Tri-cone, the English blues musician Dave Peabody has a single cone guitar and Mike Messer (another English musician) and myself have round-neck Tri-cones. Unique and original instruments all of them.
Alan also occasionally and successfully promoted live music and he arranged and promoted concerts for Bob Brozman, myself and Mark Makin, Dave Peabody & Mike Messer usually in his home town of Nottingham in the U.K.
Alan was also one of the world’s leading experts on old clocks, watches and timepieces. He was a Fellow of the British Horological Institute (FBHI). His specialized area was 18th century Grandfather Clocks . He wrote books and lectured on the subject. Alan was once approached to work at Windsor Castle as “Keeper of the Queens Clocks”. Probably a greater claim to fame though was when he was visited at his home by George Harrison who wanted Allen to repair some damaged ukuleles, which George collected.
Along with his wife, Jenny, and their son, John we all miss him, his friendship, and the encouragement and support he bestowed with his enthusiasm and generosity.
Thanx Allen.
Main Menu