White Shadows in the South Seas

I presented WHITE SHADOWS IN THE SOUTH SEAS  at the 2018 Commonwealth Games Entertainments on the beach at Surfers Paradise on the Goldcoast in Australia.

A silent film for screening with a live score written and performed by Mike Cooper.

The film is based on the 1919 novel of the same name by Frederick O’Brien and began production in 1927 as a co-venture between documentary filmmaker Robert Flaherty and MGM and was filmed in Tahiti despite the opening credits saying it was in the Marquesas islands. O’Brien’s original novel was set in the Marquesas.

The film is known for being the first MGM picture to be released with a pre-recorded soundtrack. The soundtrack consisted of a romantic score by William Axt and David Mendoza, with a few sound effects such as wind howling, a storm, trees ruffling and one faint word “Hello”. The Tahitian location was sumptuously captured by cameramen Clyde De Vinna and Bob Roberts. De Vinna picked up an Academy Award for Best Cinematography for his efforts at the 1929 ceremonies.

Frederick O’Brien had spent a year in Samoa 1919-1920 living amongst the Samoan islanders. Robert Flaherty had lived with his wife and children in Samoa from April1923 to December 1924 filming the feature documentary Moana released in January 1926 by Paramount Pictures.

Several years later MGM production head Irving Thalberg was in hospital recuperating where he read O’Brien’s book. Thalberg decided to put O’Brien’s book to film. Flaherty, a friend of O’Brien’s, was brought aboard as director while W. S. Van Dyke was added as support to Flaherty.

The film would feature a supporting cast of almost all Tahitian islanders and/or actors with only the featured stars and a few heavies/villains coming from Hollywood. Flaherty, upon arriving in Tahiti, began shooting the film at a slow pace and after clashing with Van Dyke, Flaherty left the production, leaving Van Dyke as sole director for the film. Van Dyke finished the project on schedule. However, Flaherty did shoot some scenes before departing the production, and some footage of his may be seen in the existing print, i.e. ‘ … the lagoon in the jungle scene’.

Story ..
Unscrupulous trader Sebastian has little trouble cheating the inhabitants of the South Seas paradise and leading the natives to adopt some of the more unfortunate habits of “civilized” men. He has little opposition save Dr. Matthew Lloyd, once an educated and prominent physician but now in the depths of alcoholic deterioration. When Lloyd goes too far in his attempts to thwart the success of the trader’s greedy plots, Sebastian sees to it that the doctor is framed for a crime and sentenced to be cast adrift tied to the wheel of a derelict ship.

His ship is caught in a typhoon and Lloyd is shipwrecked–freed from the ship’s wheel–and washed ashore on another island as yet untouched by the “White Shadows.” He is rejuvenated by the pristine environment and the innocent people, who embrace him as a god. But the corruption of civilization is too close and the world too small for paradise to be eternal. WHITE SHADOWS IN THE SOUTH SEAS has its own facebok page –

There have been two releases of my soundtrack on recorded media. A ROOM40 c.d. from Australia and a double ten inch vinyl version on Sacred Summits in the U.K. 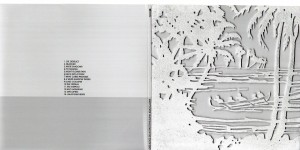 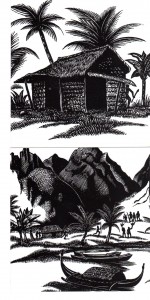 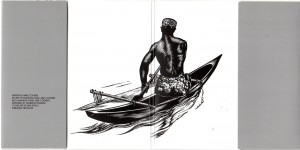 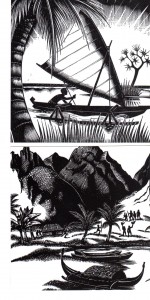