Legong: Dance of the Virgins

Legong: Dance of the Virgins (1935)
“Come, smile, my child. This is the day of your last Temple dance. Soon you will wear the bridal sarong.”Director: Henri de la Falaise, Robert Sidney
MIKE COOPER performs a live soundtrack composed for lap steel guitar, processed field recordings (from Bali,Thailand and Sarawak) thumb pianos and sampled small gongs.
On the day of the temple feast of Tampaksiring, Poutou, a young maiden who performs the LEGONG, the dance of the virgins at the sacred temple, meets Njong, a carefree youth from Northern Bali. As they gaze at each other, she remembers a prophecy that warned “Should love enter thine eyes and go to thy heart, beware. For should he whom thou choosest not return thy love, thy gods will frown and disgrace will befall thee…”
This film, shot in 1933 in Ubud in Bali when Bali had become THE place to be. Extolled as a paradise on Earth with beautiful (mostly topless) natives and an exotic culture, the small island was soon swarming with the rich and famous. When the Marquis Henri de la Falaise de la Coudray–or “Hank” to ex-wife Gloria Swanson and current wife/producer Constance Bennett–arrived in Bali with a Technicolor crew in 1933, there had already been a slew of “documentaries” that reaped box office success in the United States. Directed by the dilettante husband of two famous movie stars, how good could the film be?
Slashed apart by censors around the world, LEGONG quickly disappeared and was forgotten.With its impressive sensitivity to Balinese customs (the dance and religious rituals they filmed have become extremely important for their ethnographic value alone) and an eye for the natural beauty of the island, the film ranks with F.W. Murnau’s TABU ( another of Cooper’s live film/music presentations) as an enduring masterpiece of tropical splendor. LEGONG is a feast for the eyes and the imagination.
The film is particularly important for capturing the splendor of the costumes, dances and decorations of the temples in Technicolor before they became spoiled by commercialization. Viewed from this perspective, it’s a fascinating piece of anthropology The limitations of two-strip Technicolor (which includes red and green only, and cannot reproduce blue well) aren’t readily apparent due to the lush green jungles and the golds and reds of the costumes.
The actors are all locals essentially playing themselves for the most part. This was one of the last silent feature films to be released commercially (as well as one of the last two-strip Technicolor features). The intertitles themselves are gorgeous works of art, created by noted Mexican artist Miguel Covarrubias, with their stylized and striking ornamentation. 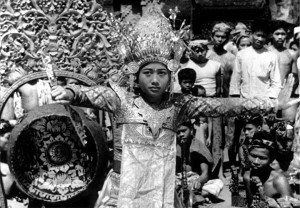