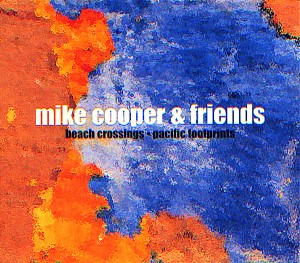 BEACH CROSSINGS – PACIFIC FOOTPRINTS – Is a meditation in words and music on European presence and colonization in the Pacific from the first landing of the Dolphin at Tahiti in 1766 up until the dropping of the atomic bomb in World War two on Hiroshima and  contemporary Indonesian colonization practices.
It was originally commissioned by radio producer Pino Saulo for RAI3 Radio in Italy who suggested doing something which might include  the Bob Dylan song Masters Of War, a version of which closes the piece.
The music/The Score  – as with other scores of mine there is no written notation – I don’t read or write music myself. Instead I rely on each musicians individual talents and  ability to improvise and/or to learn certain sections by ear and follow hand signals, prompts and other visual cues. I am always open to suggestions as well. The score is in the form of a storyboard with groups or individual musicians being given sections where they play. There is a resider who narrates the text and duration is arbitrary and worked out in rehearsal but it usually last about one hour. There is also an optional video/film  Planet Pacific which accompanies the piece as a backdrop which I shot on super eight film in various Pacific locations.
The text, originally in English, was translated into Italian for the RAI3 production. ABC Radio National in Australia also commissioned another version for their Night Air program with producer Brent Clough reading the text in English. This version used some of the original music from the RAI3 production plus new recordings and pieces from my own archive and the ABC’s archive.
Beach Crossings – Pacific Footprints  – is meant to be performed live and with a flexible number of musicians. There have been live versions in Palermo/Sicily and Lisbon in Portugal. In Palermo in Sicily  the “Mike Cooper  Dedication  Orchestra”  was made  up of local Palermo musicians plus Elio Martusciello from the Rome performance and was part of a four day special dedication to myself and my music.
Another  version was performed in Lisbon as a duet, with Paulo Raposo (from Sirr Records) reading the text in Portugese with myself playing al the music and reading in English, as part of the  RadialX Radio Arts Festival in September  of 2008.
The Tracce c.d. version, in Italian, has been  featured in its entirety, three times on Radio Grenouille  in Marseille, France. The text can of course be translated into any language and invitations for further performances are welcome.
The sound sample above is from the live concert c.d.recording made for RAI3 Radio in Italy who produced the c.d. version on Tracce Records. The text is in Italian and features Federica Santoro reading.
The sound sample below is excerpts from the National ABC Radio  Night Air version with Brent Clough reading.
MP3 Sample – BEACHCROS.ENGLISH
The Score. 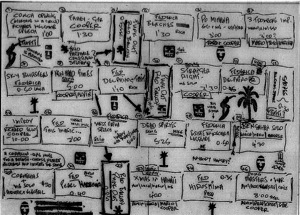 Genesis of the text – Greg Dening..etc
I was in the bookshop of the Museum of Contemporary Art in Sydney with my friend and ABC Radio Arts person  Brent Clough when a book titled ‘Beach Crossings’ by Greg Dening virtually jumped from the shelf into my hands. I read one page and realised I that it had to be bought.
Greg Dening spent his life as, amongst other things, a writer of books about Pacific Island history. His version however is a voyage across culture, time and self. A view from both sides of the beach where the beach is a metaphor as well as a reality to be crossed. A space of meeting and departure on several levels. His book Beach Crossings is mainly concerned with the Marquesas Islands, its inhabitants and some early Europeans who chose to live amongst  them in the late 18th Century. He also wrote a wonderful book titles ‘Mr Bligh’s Bad Language’ – a meditation on the Mutiny On The Bounty.
Brent Clough was about to embark on a mission of beach crossings of his own in the Pacific to make a program for the ABC/BBC to be titled ‘Pacific Footsteps’ . Its subject was to be the Pacific Ocean and its island nations 60 years after World War 2. I decided here also was my subject.
I took three quotes from Greg Dening’s book and then searched for others to make a piece of music and text for a small group of musicians and a reader which would  start with the first Europeans arriving in Tahiti in 1766 and end in the 20th century with the dropping of the atomic –
bomb  on Hiroshima. The text is linked by music, improvised by musicians following the graphic score and/or conduction indications from me, plus several original songs of mine and ending with Bob Dylan’s Masters Of War. There is also a simultaneous screening of my film “Planet Pacific –  Pieces Of Heaven?”  shot on super eight film around the Pacific.
The text is borrowed and/or adapted with permission from Greg Dening, David Toop, Steve Feld, New Internationalist, The Cambridge History Of Pacific Islanders and other unknown  sources as well as original observations and thoughts. 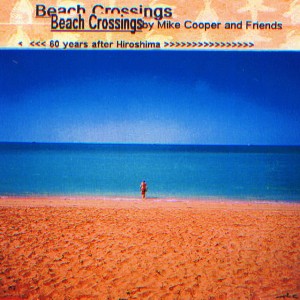