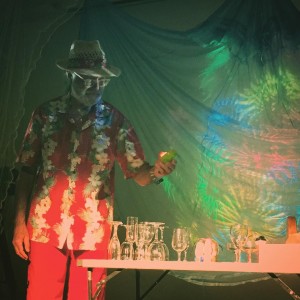 Glass Love is the title of a surf film and c.d.made by Australian film maker and musician Andrew Kidman and released on his Spunk label.
“In the film I wanted to feature the generational link and love of surfing that gets passed down through families, in particular through the Curren and Purchase families. The sons are surfers and their fathers are surfer/shapers.” – Andrew Kidman 2006. 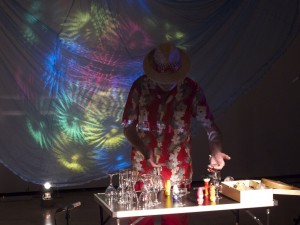 My performance is a recreation of a sound performance – which I did not attend – in 2015 by David Toop as part of a series of performances within an installation by Christian Marclay at the White Cube Gallery in London. My performance is a personal sonic response to a short video clip of part of David Toop’s performance posted on Facebook and to Christian’s audio visual piece titled ‘Pub Crawl’ – which I have not seen either. I treat the video and a review/description of Marclay’s and Toop’s pieces as a kind of ‘score’ to perform. 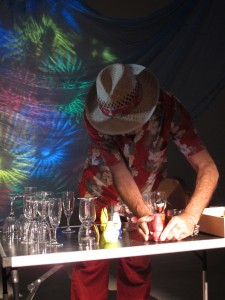 “In (the)  installation, Pub Crawl,…. Marclay has compiled (video) footage of his morning strolls through London’s East End in search of discarded empties from the night before. The rattling of kicked cans, crunching of crushed glass, and the light tinkling drawn out from tapping bottles and glasses with his silver pen create a soothing soundtrack …” 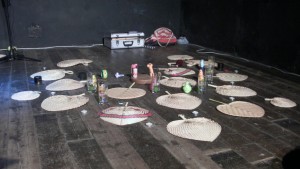 The word ‘Glass’ in the surfing lexicon can also refer to the fibreglass finish on a surfboard or an ultra-clean wave without a ripple that often looks like glass.
the two below videos are quite heavy and may take a few seconds to download
My performance involves a large number and variety of drinking glasses and a large number and variety of small battery powered hand held electric fans.
The piece is an homage to both Andrew Kidman David Toop and Christian Marclay as ‘surfer shapers’ and our ‘generational link’ in the hope that we are all passing something down…somehow.
Glass Love has been presented at Gallery Nube Di Oort (Rome 2015), Swiss Institute Rome (2015), Teatro Tordinona (Rome 2015)
https://youtu.be/ugLef5z9sbM
http://davidtoopblog.com/about/
http://whitecube.com/exhibitions/christian_marclay_bermondsey_2015/
Andrew Kidman – http://www.andrewkidman.com
Main Menu