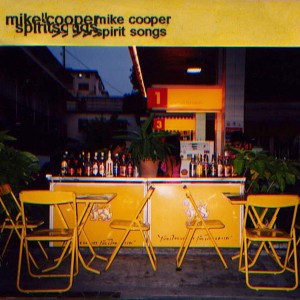 On my Reluctant Swimmer/Virtual Surfer cd I bought my voice and the song back into my improvised/electronic concerts. Spirit Songs is the first complete c.d. of my own songs since Life And Death In Paradise which came out in 1974 on the Fresh Air label (soon to be re-released on c.d.) which I am proud to say, features saxophonist  Mike Osborne, bass player Harry Miller and drummer Louis Maholo amongst the players. I like to think of these Spirit Songs pieces as sung text rather than songs in fact. Some of them have been around a long time, laying between the pages of a small book of postcard sized collages – something I make from time to time. The backing for the texts are, apart from two, all digital electronic compositions – looped samples of sounds found on acoustic and electric guitars. I have been experimenting with singing these text live on gigs, sometimes with these same backing tracks on mini disc, but also improvising and building new backing track on the fly and even swapping the texts and backing tracks around, resulting in a different version each time.

“SPIRIT SONGS is…a glorious marriage of all three of Cooper’s previous musical strategies; creating a stunning hybrid. The album contains 10 songs performed on fingerpicked acoustic and electric lap steel guitar,often looped and treated in real time, with Cooper singing lyrics in a quietly meandering,semi-improvisatory manner that recalls a more polished Jandek. The style of songwriting is immediately recognizable as blues, but an intuitive,idiosyncratic form of folk-blues, with Cooper narrating laments over matters personal and global,gentle universalisms that double as political messages. All of this occurs over a loose rhythmic framework provided by various noisy loops,with cracks,scratches and pops,echoes and distortions skipping out from every refrain. It’s a gentle cacophony with subtle undercurrents of beauty and sadness, effortlessly nostalgic but still very rooted in the now. I think that Mike Cooper can genuinely call this style his own; I’ve never heard anything remotely like it, and it works beautifully, highlighting both song and singer, as well as the happy accidents resulting from the intersection of structure and chaos. In a sense, Cooper prepared us for this direction with the unexpected intrusion of song into his live CD-R Reluctant Swimmer/Virtual Surfer released last year, but Spirit Songs fully fleshes out the ideas only briefly glimpsed in that performance.”(Jonathan Dean – Brainwashed)

“Any album that reminds me of Bjork, Robert Wyatt, Mayo Thompson and Lol Coxhill can’t be all that bad…there’s something curiously moving about Cooper’s close-miked fragility (that’s where Wyatt comes to mind), accompanied by the melancholy twang of his blues-inflected guitar and all the strangely disturbing clicks, pops and stochastic clatters. It’s also a reminder that some of the most poignant albums of recent times have been recorded in the intimacy of the artists’ own home…”(Dan Warburton – Paristransatlantic Review)