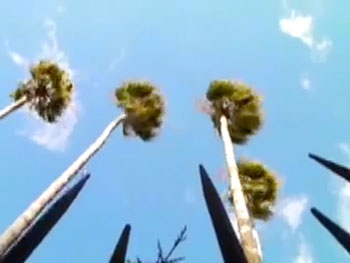 This c.d. was recorded in Beirut over two visits in the same year-2010. It continues to follow a musical road I set out on when I released ‘RELUCTANT SWIMMER/VIRTUAL SURFER’ on my Hipshot c.d.r label (2005 – Hipshot 014) which was recorded live at the Controindicazioni Festival in Rome in October 2003. During that concert I drew together for the first time my work with live improvisation, songs, field recordings, real time sampling, digital treatment and looping, using acoustic and electric lap steel guitars. The real breakthrough though came when I sang songs independently of their original chord structure and harmony across a backing of improvised loops and drones all created by live sampling of my own playing in real time which is the path that this c.d. pursues. The c.d. comes in a silk screened bubble wrap envelope – made by the Lebanese artist/musician  MAZEN KERBAJ. The intention is that when posted you receive a c.d. housed in a piece of post-art.
Read more about the JOHNNY KAFTA  – http://johnnykafta.com
Read more about MAZEN KERBAJ – http://mazenkerblog.blogspot.com 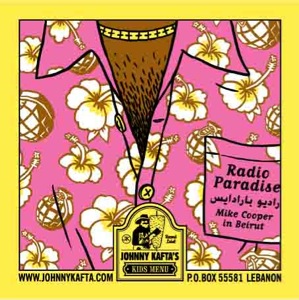 MIKE COOPER – RADIO PARADISE – (JOHNNY KAFTA’S KIDS MENU)
What a gem I was lucky enough to trade my finances for in the purchase of Mike Coopers Radio Paradise. This stunning disc with its deconstructed devotion to Pynchon, its heavily disguised blues covers and it’s demand for an intelligent listener is a diamond in the coal mine of 2012. Mike Cooper has been a blues man all his life but this doesn’t stop him questioning and challenging the basic core structure of the blues ethic for an intensified listening experience on this disc.

“The Blues” like all established core sound processes is constitutionally poised between its ethical and political bankruptcy as (to badly misuse Derrida) “the good music” – coded to its idealist and moral ascendancy – and the ongoing reconfiguration of dynamics and process. In other words, it is a brave man who “messes” with “The Blues” even when he has the authority of Mike Cooper.

There is something irreducibly conservative in our relationship to “The Blues.” The political relationship infuses the sound relationship so that our experience of it becomes almost tactile. “The Blues” is embodied with reference to your own place in history.  That is, when I listen, I listen as a white Australian middle class female born after “The Blues” existed as contributor to fervent god worship or acted as reluctant political point scorer. Who I am in relation to “The Blues” is not only essential to identify if I claim to critique any blues music but also needs to be clarified for my place as listener. The always already  subtext is, by the very act of listening I am colonizing because of my age, skin colour, genetic heritage and culture.

Without wanting to ignore the importance of a colonizing history’s being self-aware, I would like to argue that Mike Cooper doesn’t give a shit about any of that.  With an act of pure subversion, he wants to shake “The Blues” out of its history-as-baggage and align it with creative enquiry appealing to a freedom and an imaginative intelligence in the listener.  My blues listening wont be the same after this.  I’m able to hear outside of context now and for this Australian white girl, that’s a liberation worth celebrating. This is not a negation of histories – I will be “pc-careful” to add.  It’s an inclusion of imagination and art. The transformation Cooper imposes addresses us face-to-face, the traditional sound of his Blues-history voice dancing in tandem with the pure madness of a dissipated, textual encounter with the avant-garde slurrings and looped back manipulations of a modern studio construction.

The story goes, the Johnny Kafta label wanted a live recording (with trade mark Hawaiian shirts)  of Cooper in Beirut but were talked into a studio album by Cooper himself. Then he comes out with this stunning reconstruction. My listening engagement has a mirror gaze aspect I have never experienced in blues before.  I am recognizable here, even if the readout is as diffuse an unfathomable as my familiar image and identity.

When it comes to “The Blues”  – thanks to Mike Cooper – I am no longer a by-stander.  I recognise myself.

You can order copies of this stunning disc through the Johnny Kafta Label here.

“Eclecticism is the degree zero of contemporary culture” wrote Jean-Francois Lyotard in The Postmodern Condition: “One listens to reggae, watches a Western, eats McDonalds for lunch and local cuisine for dinner, wears Paris perfume in Tokyo and ‘retro’ clothes in Hong Kong.” You can’t get more PoMo than a Rome based Englishman expat guitarist (and collector of Hawaiian shirts) singing Delta blues in Beirut. And so on Radio Paradise not only does Mike Cooper cover ‘If I Get Lucky’, ‘Special Rider’ and ‘Heartbreak Hotel’, he also has the courage to set extracts from the uber-postmodern novel Gravity’s Rainbow ( to music). But unlike the precious airbrushed cadences of David Sylvian, whose approach to song in strikingly similar, there’s nothing remotely pretentious about the result. Cooper works wonders with just his voice, cask matured but still light with delicate hints of Tony Newley and Matt Monro and a minimum of equipment : a couple of Resophonic Tricone guitars, a cheap sampler, pitchshifter pedal and a Kaoss Pad. Radio Paradise is a colourful as his shirt and as tasty as a good kebab. (Dan Warburton-Wire)

I like to be surprised like that! Firstly, lapsteel guitarist/electronician Mike Cooper delivers with Radio Paradise a singer-songwriter recital (I hadn’t heard that from him yet). His songs surf somewhere between Eugene Chadbourne and Fennesz, through a Hawaian prism. Secondly, Lebanese label Johnny Kafta’s Kids Menu has found a very original sleeve design: the bubble envelope in which the CD is delivered IS the sleeve. The artwork is printed straight onto the envelope, and track titles and credits are printed on the CD itself. The customer’s address and necessary stamps complete the design. I love it!