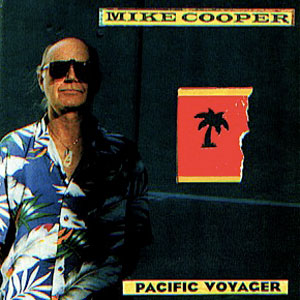 PACIFIC VOYAGER – HIPSHOT 025
Four new electronic soundscapes recorded live in various locations around the world. All played on my acoustic 1930’s National Resophonic Tri-Cone – sampled live, looped, processed and recorded in real time. Inspired by and dedicated to David Lewis, John ‘Keoni’ Meigs and Robert Gibbings and all past and present Pacific Voyagers/
REHU MOANA – In Maori means ‘Ocean Spray’ and it was the name given by David Lewis to the 40 foot catamaran in which, in 1965, he sailed around the world. While crossing the Pacific Ocean during this voyage he was able to the test academic theories about navigation as practised by old-time Polynesians, which had enabled them to cross vast tracts of the ocean and colonise even the most remote and distant islands. These theories about navigation without instruments, included following sun patterns, observation of the flight paths of annually migrating birds, observing and following the star paths taken by the birds and many other means, mostly unknown to non-Polynesians until Lewis sought out the last remaining few traditional navigators in the islands who retained the knowledge. He subsequently wrote ‘We The Navigators-The Ancient Art Of Landfinding in the Pacific’ (University Of Hawaii Press).
KEONI – is dedicated to JOHN ‘KEONI’ MEIGS who was a designer of Hawaiian textiles used in the manufacture of Hawaiian Aloha shirts. He worked on textile design from 1938 through until the early 1950’s when he moved to New Mexico where he became a full time painter and artist. In 1997 the Honolulu Academy of Arts held an exhibition of his fabric design in their graphic arts gallery titled ‘Keoni of Hawaii:Aloha Shirt Designs 1938-1951. At the time of this exhibition Meigs didn’t own a single Hawaiian shirt despite the fact that they were selling to collectors for hundreds of dollars. He went out to the local Saver store and bought himself six shirts for $2.50 a piece – not his own designs of course. He died in 1993.
ROBERT GIBBINGS woodblock print work I first came across in a book called ‘Over The Reefs’ which I bought in a Melbourne secondhand bookshop. A story based on Gibbings own travels in the Pacific islands illustrated with his own woodblock engravings. I then found ‘A True Tale Of Love In Tonga’ which is a short story based on the narrative of William Mariner, who was held prisoner on Lifuka in Tonga from 1806-10. The little book has 23 of Gibbings engravings in it. This year (2008) I found a copy of ‘The Discovery Of Tahiti’ an illustrated version, by Gibbings, of George Robertsons journal when he was master of HMS Dolphin – the first European ship to visit Tahiti. The arrival of the Dolphin at Tahiti figured, coincidently, in the text of my Beach Crossings-Pacific Footsteps composition. I decided it was time to investigate who Gibbings was a little more and discovered to my surprise that he had been a teacher at the University of Reading Art Department, where I was born and grew up, and that the museum in Reading holds a collection of his work.
Discography
Main Menu