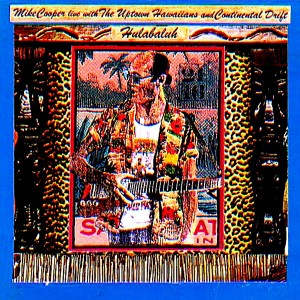 The Uptown Hawaiians made one 10 inch l.p. for Jean Rochard’s Chabada
label in 1984 (Chabada OH18) which has never been re-released on c.d.
We only ever played one live concert in the UK and these tracks were
recorded at the Szene in Vienna during a tour of Austria in 1989. Tracks
include ‘Kanaka’, ‘Blue Hawaiian Moonlight’, ‘Sleepwalk’, ‘Xmas in
Hawaii’, ‘Moon of Manakoora’, ‘Sweet Leilani’ and a 10 minute
outerspace-surf version of ‘Honolulu Hip Hop’ with Lol rapping the lyric.

Continental Drift recorded live at the Lugano Blues To Bop Festival in
Switzerland in 1990 and 91. The idea was a blues band that wasn’t rock
guitar orientated but leant more towards free-jazz and improvised music.
Features Mike Cooper, National electric lap steel guitar and vocals, Peter
Beresford (Steve’s brother) on keyboards, Pat Thomas on keyboards, Tim
Hill on alto sax, Geoff Hawkins on tenor sax, Garry Jones on bass and
Simon Price on drums. This band also only ever played one gig in the UK.
After a rehearsal in Reading, before going to Switzerland where these
live recordings were made. One track on the ‘Spirou’ compilation c.d. on
Nato Records and two tracks on my ‘Island Songs’ c.d on Nato are the
only other recorded evidence of the groups existence. Titles played are
‘Stop Breaking Down’, ‘Special Rider’, ‘Grinning In Your Face’,
‘Hellhound’. Total time 59 minutes.

Hulabaluh – Wire Review – Julian Cowley
Hulabaluh is Cooper playing lap steel guitar and mandolin, indulging a
passion for Hawaiian music at a 1989 concert in Vienna, accompanied by
slide guitarist Cyril Lefebvre and other musicians with ‘inclusive taste’- Lol
Coxhill on soprano, Ollie Blanchflower on bass and Steve Beresford on
keyboards. Interspersed are recordings made in Switzerland at the start of
the 1990’s by his project Continental Drift, nudging material such as Son
House’s ‘Grinning In Your Face’ onto freer ground underpinned by funky
rhythms. These dislocated blues excursions, with Pat Thomas on keyboards,
work well enough, but it’s the Hawaiian selections, played with charm rather
than an overt parody, that make Hulabaluh a genuine pleasure. And if you
still crave strangeness, ‘Honolulu Hip Hop’ refashions the lounge along non-Euclidean
lines.