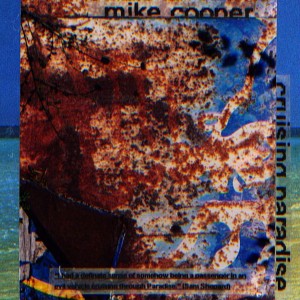 “I had a definate sense of somehow being a passenger in an evil vehicle cruising through Paradise. ” – p.42 Cruising Paradise by Sam Shepard (Vintage Books Edition.)
Reviews – “Cruising Paradise is Cooper improvising with electric lap-steel guitar and electronics. The most obvious thing about it is that nothing is obvious. Familiar lapsteel sounds sneak in at the margins, but its substance is buzz and percussive click, strategic distortion, murky drones, crackle and clang.” ( Wire – April 2003)
“Well recorded alien electric string sounds that occasionally remind me of Fred Frith, who also lays his guitar on a table to manipulate in a variety of ways. It sounds as if Mike is hitting his strings with different metal objects,soft and haunting. He is also looping some of the static or noise as a hypnotic repeating cushion while he adds short warped string fragments on top. This music is much closer to ambient or even Erstwhile type of subtle guitar/electronics. Mike does a fine job of layering his sonic tones and echoed electric strings, so that we stay on an enchanting journey,which moves slowly, but is filled with well-selected textures which float in and out, but never pile up too much. occasionally a few normal lap steel riffs will appear, but this never lasts for too long before they are altered in some strange way.’ Downtown
Music Gallery N.Y.
Discography
Main Menu