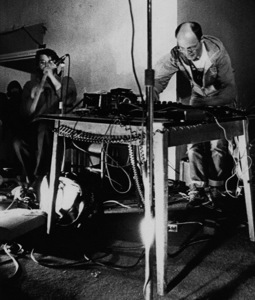 The photo above is an early version of Trystero System with saxophonist  Tim Hill – playing at the Paradise Club in Reading / UK in the eighties.

Trystero System has existed since the mid eighties and is usually myself and another person and is usually improvised music played across dance beats of some style or another. There have been many versions over the years and two current versions are with video artist and VJ Grayson Cooke from New Zealand who lives in Australia (samples of our work together can be seen on YouTube – links below) and with Italian drummer Fabrizio Spera.

The Crying Of Lot 49 & Trystero by Thomas Pynchon.

The novel follows Oedipa Maas, a Californian housewife who becomes entangled in a convoluted historical mystery when her ex-lover dies and designates her the co-executor of his estate. The catalyst of Oedipa’s adventure is a set of stamps that may have been used by a secret underground postal delivery service, the Trystero (or Tristero).

According to the historical narrative that Oedipa pieces together during her travels around the San Francisco Bay Area, the Trystero was defeated by Thurn und Taxis – a real postal system – in the 18th century but went underground and continued to exist into Oedipa’s present day, the 1960s. Their mailboxes are disguised as regular waste-bins, often displaying their slogan W.A.S.T.E., an acronym for We Await Silent Tristero’s Empire, and their symbol, a muted post horn. The existence and plans of this shadowy organization are revealed bit by bit; or, then again, it is possible that the Tristero does not exist at all. The novel’s main character, Oedipa Maas, is buffeted back and forth between believing and not believing in them, without ever finding firm proof either way. The Tristero may be a conspiracy, it may be a practical joke, or it may simply be that Oedipa is hallucinating all the arcane references to the underground network that she seems to be discovering on bus windows, toilet walls, and everywhere in the Bay Area. ( from Wikipedia) 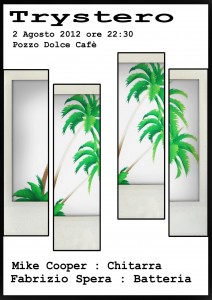