Truth In The Abstract Blues

Our latest album on vinyl from Ethbo Records 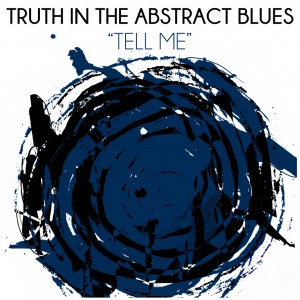 TRUTH IN THE ABSTRACT BLUES – “One foot in the abstract, one foot in the blues”
( quote borrowed from Jimmie Giuffre )
It would be very wrong to think of TRUTH IN THE ABSTRACT BLUES  as simply a ‘blues band’;  Instead, think a collective of musicians improvising around themes of mostly country blues songs and re-locating them from their 12 bar musical structures into a new free-jazz and electronic environment where all three members are at liberty to explore their potential away from the restrictions of style and cliche that seem to have attached themselves to the form.
The lyrical poetry and music of Robert Johnson, Charlie Patton, Blind Boy Fuller, Howlin’ Wolf, Blind Lemon Jefferson, Muddy Waters and others is de-constructed, explored and offered up as free / electro-acoustic / new jazz / future blues.
For the past 40 years I have searched and found truth in the abstract blues – imagine Charley Patton meets Albert Ayler, Stockhausen and Scelsi or Blind Boy Fuller, Sonny Sharrock, Sun Ra and Penderecki. Deep blues, slide guitar, free improvised passages of ecstatic grooves; cross rhythms, clashing, overlapping, out of sync electronic loops and drones, de-constructed, re-configured future blues. (mike cooper) 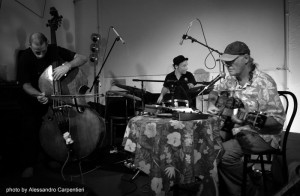 REVIEWS
“Maven lapsteel guitarist and vocalist Mike Cooper led his brilliant Truth In The Abstract Blues ensemble for the next set. If you’ve never connected free jazz and the blues (and you find Loren Mazzacane Connors rather boring), this is your alarm clock. Featuring Geoff Hawkins on tenor saxophone, Roberto Bellatalla on doublebass and Fabrizio Spera on drums and percussion, I just couldn’t believe this quartet was able to bring the concept of the abstract blues so viscerally to life, and with such an outrageous amount of imagination and versatility. Almost simply by ruminating over the title of the classic Oliver Nelson album “The Blues and the Abstract Truth”*, these guys have created an entirely new genre, albeit one that sounds like it has existed in the very fibers and corpuscles of jazz, improv and blues from the very beginning. Like unearthing something we all sensed was there all along, it was just that nobody had discovered it yet.
They basically played standards like “That’s Alright Mama,” “Heartbreak Hotel” and “Judgment Day” with a combination of backwards guitar, moaned vocals, a saxophone that squealed hunks of dripping blues, and a rhythm section that was as tight as any classic prog rock band but felt as loose as a stoned marsupial. Bellatalla’s bass playing in particular was one of the biggest revelations of the festival for me: his giant heavy bowed tones and the way he coaxed the darkest melodies using nothing but mid-range bowed harmonics absolutely floored me, every move extraordinary. He and Spera obviously have a long history because the drums clunked out a combination of funk and sprawl that made every movement feel both appropriate and transcendent, like tapping into the magic of the most common elements. The slower the arrival of the downbeat, the longer the setup, the sweeter the reward: that’s romance.
This band is Mike Cooper’s brainchild, and the singularity of his vision, playing and personality infuse their sound. He uses electronics, samples, pedals and traditional playing techniques in a combination that is so unique and yet so accessible that it makes the (supposed) modern problem of unifying all the disparate elements of oneself moot. When this set was over, I felt like I had just found an abandoned jug of whiskey from the 1920s, wriggled its fat dusty cork out, took a giant whiff of all that time with all its heady scents and then tilted the bottle back for a slow, deep slug.
[*The band’s name actually stems equally from Jimmy Giuffre’s quote “One foot in the abstract, one foot in the blues”, which is personally apropos for me, since the first jazz concert I ever saw was the Jimmy Giuffre 3, in 1993, and I’ve been running towards that sense ever since.]“ – Andrew Choate – Nickelsdorf Jazz Festival – 2014

“It starts with a squawl of electronic noise and a flurry of percussion, some guitar and scribbled piano buried in the mix behind Cooper’s straight-forward singing of Robert Johnson’s ‘If I Had Possession Over Judgement Day’, almost sounding like some lost Alan Lomax field-recorded sample floated over free improvisation groove. And then it’s straight into a 15 minute blues and gospel medley kicked off with slide guitar and cymbal waves…it’s very recognisably the Mike Cooper who first appeared on The Inverted World and Oh Really?! more than 40 years ago, but clothed in startlingly inventive and surprisingly different robes to anything you’ve encountered before….the result is probably the best record of Cooper’s long and varied career and one of the most original, uncategorisable and inventive albums you’ll hear in a quite a while.” (Ian A. Anderson – Froots Magazine – UK) 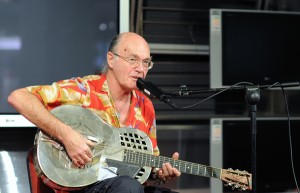 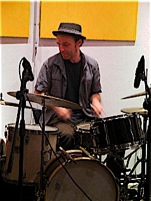 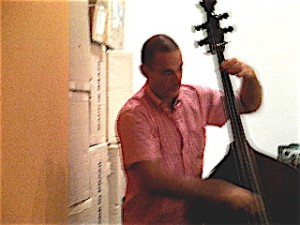 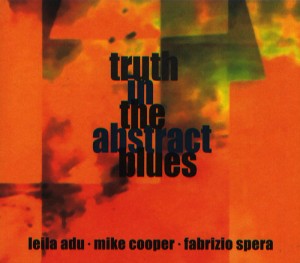