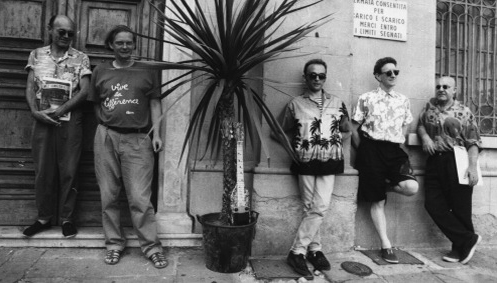 THE UPTOWN HAWAIIANS – the original band, as heard on the track below, was myself (hawaiian guitar/vocals) , Cyril Cefebvre (slide-guitar), Lol Coxhill (sax/vocals), Steve Beresford (keyboards/vocals), Max Eastley (ukulele/guitar), Olly Blanchflower (double bass) and we were joined on the record by Frank Ricotti (marimba) – we made one record for Jean Rochards Chabada label.  We toured Europe several times playing in France, Switzerland, Italy and Austria but only ever played once in the U.K. at the ICA when I organised a celebration of 100 years of the Hawaiian guitar in 1989. We were supported by Bob Brozman on that night.
We played a cocktail of music based on Hawaiian, Exotica, Steel Guitar, Surf and Beach Culture with an added pinch of free-improvisation, shaken and stirred.
At a certain point, through Cyril Lefebvre’s Paris contacts, we teamed up with a troupe of Paris based Tahitian dancers led by Tiiere Taputu, who played ukulele and sang, and his dancer wife, bringing our numbers on stage to 12 sometimes.
The photograph above was taken in Sarzana/Italy and is the same band but with Gary Jones on electric bass. Unfortunately Gary, Cyril and Lol are no longer with us. Both Cyril and Lol died in 2012 and Gary died in 2007.  See my memorial page for more info on these wonderful people.  I miss them. Aloha o’e and maholo nui.
Archive pages
Main Menu