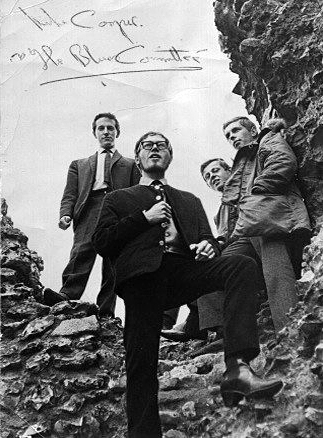 The Blues Committee – the first band I was ever in, was formed in fact by guitarist Paul Manning and another, now unknown to both of us, guitarist in about 1962. They advertised for a singer somewhere or other or by word of mouth and I got to hear about it and offered my services. I always was a better singer than instrumentalist (apparently) and took up harmonica and dropped the guitar to join them. Until that point I had been learning to play mostly American folk songs and some folk-country blues solo. We began as a trio but soon mutated into a quartet with the addition of a drummer. Local jazz drummer Eddie Page then joined us and our unknown guitarist friend was replaced with a young (younger than us) scooter riding mod guitarist Dickie Reeves. We had no bass player and the two guitarist would alternate replacing the bass lines themselves. We never really missed the bass player we never had it seems.
We started out with a regular gig at The Latin Quarter a club in Bridge Street which had been the site of a coffee house called The Palomino in my school days. The Latin Quarter was a multi level night spot with a licensed bar and gambling club up stairs and coffee house cellar bar – which is where we started out playing. We later moved upstairs onto the upper level which also had a jazz club area, with stage etc, as well as the bar. My jazz appreciation education came from attending sunday afternoon sessions here. Drummer John Marshall was among the regular players there and a young prodigy called Bob Stuckey who I last saw playing with John Marshall and Dudu Pakwana at Ronnie Scott’s Old Place in the year who knows when way back.
The Blues Committee even had a ‘manager’. An old school friend named Richard Rhyl. He even built our p.a system for us by hand and a portable stage for those low yo-yo gigs that didn’t have one. You can see both in the photo at the bottom of the page. He did his best to get us gigs, and probably did, but we seemed to have parted company with him after a while.
We were pretty much the only local Reading band playing Chicago style blues and r&b and we were inspired in our efforts by Alexis Korner and Cyril Davis, both of whom played quite regularly in Reading. The Ricky Tick organisation were the main promoters of this style of music in Reading and operated in several different venues over the years in our town; the Oxford Ballroom and St.Johns Ambulance Hall among them, and ending up at the Olympia Ballroom in London Street – right across the road from where I lived at the time. As the only local band playing in the style we got to do a lot of support spots to our favourites as they came through.
Apart from local success we had little else outside of the Reading area – although we did travel as far as Southend On Sea and the only place I think that we could have played was the Shades, which was in the basement of a coffee house owned by Robin Trowers father. Robin was in The Paramounts with Gary Brooker (later Procal Harum) at that time.
Interestingly enough, through my interest in Hawaiian music later in life, I became a friend of one Kealoha Life who had played steel guitar and sang alongside Gary Brooker’s father Harry Brooker in Felix Mendelsons Hawaiian Serenaders, as did Sam Mitchell who was father to the folk/blues slide guitarist Sammy Mitchell with whom I shared many stages and even a record or two.
The Blues Committee never recorded, but recently Eddie Page found a reel to reel tape of the band circa 1964. The sample above is from the tape and is one of our originals with Dickie taking the lead guitar part. As far as we can work out it was recorded at the Marquee Club in London as part of audition. Sometime after these tapes were recorded Paul left the group and Geoff Hawkins joined on saxophone. The group then mutated both line-ups and repertoire. We began to bring more jazz into the music – even ending up doing songs that Lambert, Hendrix and Ross did such as Herbie Hancock’s ‘Watermelon Man’, ‘Worksong’ by Cannonball Adderley, Ray Charles’s ‘What’d I Say?’ and some more pop r&b like Rufas Thomas;s ‘Walking The Dog’. By the time we were doing Walking The Dog we had a bass player named Dave Gaynor a young West Indian guy, but the band was in its last phase by then and I was about to go solo acoustic and record my first record ‘Out Of The Shades’ with Derek Hall. Geoff and I remained friends and musical collaborators over the years but Paul Manning and Eddie drifted out of my life until in 2008 we found each other via the internet. Dickie Reeves has disappeared all together. Any news on him please contact us. 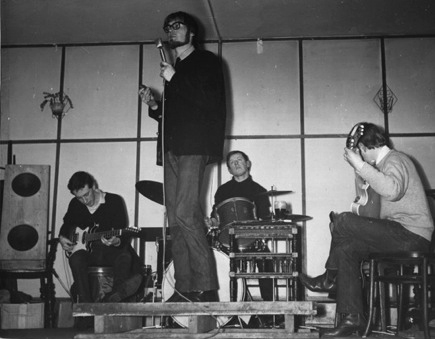