“He calls for the listener before the musician and music for him is not a grand statement: it channels a diffused mood, not made just of sounds but of visions, incidental noises, colours, stories, traditions, lyrics, images in motion.” 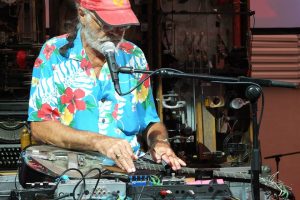 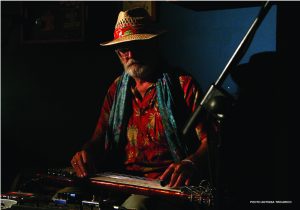 But then there was Mike Cooper, hat-shadowed face, Hawaiian shirt and a steel guitar wired into a table of electronic business. He began raga-like, an unhurried deconstructed blues-boogie, his fingers nimble across the gadgets stretching and overdriving the sound, letting new elements evolve before sweeping them aside and derailing the music into something else. Grabbing a lyric sheet from a pile on the floor he delivered songs like The White Ship’s Silence, moulding the soundscape to fit them into what was a single stream of consciousness. It was a truly riveting performance, so much was happening so fast at times, yet nothing out of place or effortful. It was never far from the blues either, though he somehow never exactly got there until the end and a straight slide-guitar accompaniment to Van Dyke Parks song Movies Is Magic. It is great that a new generation is developing free music and deploying the technology of our times to do it, making it all the more important to recognise a master musician like Mike Cooper who has spent nearly forty years doing just that and remaining ahead of the curve. – The Old England Bristol – Tony Benjamin – 2018.

“His eclectic attitude has often embraced the idea of re-representing a multitude of cultural references , through a very particular way of mixing elements and fantasies into a visionary model that goes beyond the simple idea of multiculturalism” –  NERO magazine – Valerio Mannucci.

‘Cooper, now in his seventies, is making the most adventurous music of his life… incredibly rich and evocative, and as a live performance, it’s utterly flawless. Cooper takes live guitar processing and sampling as his raw material, using it to build something complex and substantive, full of ideas and surprises, not just abandoning it half-formed. – (Jonathan Dean – Brainwashed.) 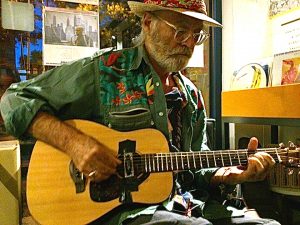 “ Cooper’s music, in any of its forms, seems drunk on the intermingling of folk traditions, searching for a spot between them all that renders the strange familiar and vice versa. He is an improvisatory musician, one who generates his music in sheets, loops, and layers, and he seems to accrete these found-sound albums like a spider spins silk, or a vine grows pumpkins. They just appear, fattened and ripe, the fruits of his memories, travels, and idiosyncrasies.” – Pitchfork.

For the past 50 years he has been an international artistic explorer  constantly pushing the boundaries.

He plays lap steel guitar and sings, he is an improviser and composer, song-maker, a visual and installation artist; film and video maker and radio arts producer.

Initially a folk-blues guitarist he is as responsible as anyone else — and more so than many — for ushering in the acoustic blues boom in the U.K. in the mid ’60s.

He has, arguably, stretched the possibilities of that genre even more than his better known contemporaries Davy Graham, Bert Jansch, John Renbourne etc. by pursuing it into the more avant-garde musical areas occupied by guitar innovators such as Elliott Sharp, Keith Rowe, Fred Frith and Marc Ribot, with an eclectic mix of the many styles he has practiced over the years. Ranging freely through free improvisation, his own idiosyncratic original songs, electro-acoustic music, exotica, traditional country blues, folk, pop songs, and ‘sonic gestural’ playing utilising open tunings, extended guitar techniques and electronics. 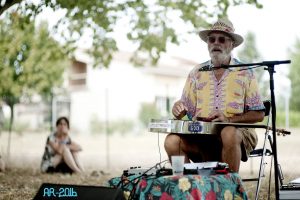 “Be not afeard; the isle is full of noises,

Sounds, and sweet airs, that give delight and hurt not. (The Tempest)

For the past 25 years he has composed and performed worldwide at festivals, cinemas and other venues with Live Music For Classic and Contemporary Silent Films. Among them F.W.Murnau’s Tabu; W.S.Van Dyke’s White Shadows In The South Seas; Legong by Henry de La Falaise and Fratello Mare by Folco Quilici, all performed solo, plus Eisenstein’s Que Viva Mexico scored for a small orchestra. Both White Shadows and Fratello Mare have been released as c.d. and vinyl lp records. 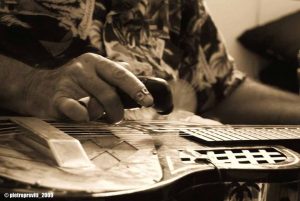 In 1999 with the release of the c.d.r. Kiribati on his own Hipshot label he created the self titled Ambient, Electronic, Exotica genre; a 21st century version of 50’s visionary Exotica musicians such as Martin Denny and Arthur Lyman, incorporating field recordings from his many travels with lap steel guitar and digital effects. Subsequent releases on various lables (Room40, Sacred Summits, Discrepant) have all been critically aclaimed and described as ‘..a hypnotic travelogue unlike anything else.’ in this review –

Outback And Beyond, is a live audio-visual collaboration, with Australian video artist Grayson Cooke, described as an ‘electronic opera’ and has been performed in England, Spain, Greece, Germany, Norway, Australia and Japan where it won a prize at the 2013 Japan New Media Arts Festival in Tokyo. The libretto, written and sung by Cooper, references the installation of the telegraph across Australia by Charles Todd and his team in the 1880’s. Cook’s live video manipulation utilises found footage from the Australian National film archives. 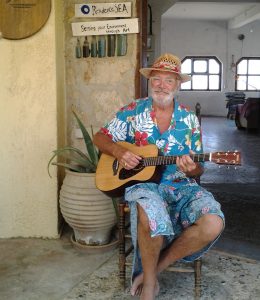 2012 – Artists in residence Pulau Ubin (Singapore) for The Artists Village.

“There are islands that have been believed to exist, islands which have appeared on maps and have even had expeditions mounted to locate or conquer them, yet they have still evaded our observation. Some are eventually established as imaginary; daemonic. Others are seen only on old maps and charts, disappearing in more modern depictions, dismissed as mistakes. Others still are unsuccessfully sought for decades, and dismissed as fanciful or mythic, and then embarrassingly found in plain view, under another, more familiar name. Mike Cooper is perhaps one of these islands. Born in England in 1942, his 40-plus years of constant re-invention, experimentation and quiet genius in a myriad of musical styles has evaded categorization, perhaps as a side-effect of having been almost completely ignored by history. Encompassing Blues, Folk, Roots music, Electronica, Jazz, Exotica / Lounge, Dance, Noise, Modern Composition or Improvisation (amongst others), Cooper’s expansive remit blasts orthodox categorization into the befuddled librarian’s realm where it belongs.”

Some recent publications that mention The Work or Shirts

“Hail the Happy Accident – an Interview with Mike Cooper”